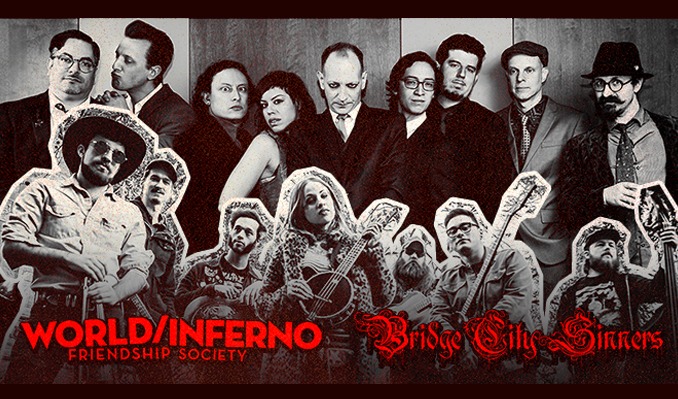 The World / Inferno Friendship Society, a gang of dangerous loonies who like to break things, is throwing a special one night only event. On May 11th, the Society celebrates the re-release of its seminal and wildly well regarded Just the Best Party album by playing it in the building that it was written in and flying in the old line up who played on it.

The Inferno, a longstanding stalwart in the underbelly of the NYC Carnival Punk back alleys, has always had a sound that is hard to describe. World/Inferno combine their skills to create a style that is equal parts soul, klezmer, and jazz featuring a saxophone trio, 88 keys of cascading piano, an accordion, snarling guitar, rumbling bass, drums, more drums, and a lot of boys and girls with very sharp teeth with a must-see stage charisma.  You know, circus music with a mischievous heart and swingy big band beat. For fans of ballroom dancing, tangos, polkas, waltzes, stage diving, moshing, and circle pitting. A Cabaret Punk Orchestra that enthusiastically delights in encouraging all who identify as youth, both young and old, to change the system.

Originally more of a shadow organization that prided itself as being more akin to an amorphous roaming gang with a rotating roster then a group with stable personnel, they routinely terrorized the tri-state area. However, just before the turn and the panicky end of the last century, the band settled on a stable and dedicated ensemble. That era is now looked back upon fondly and is regarded as one the most classic incarnations. Those 9 International Smashionistas became one of the band's most consistent and longest-lasting lineups and they are coming out of retirement for one night to celebrate the re-release of the first album that they wrote together : Just the Best Party.

Official WebsiteFacebook
*Service and handling fees are added to the price of each ticket.