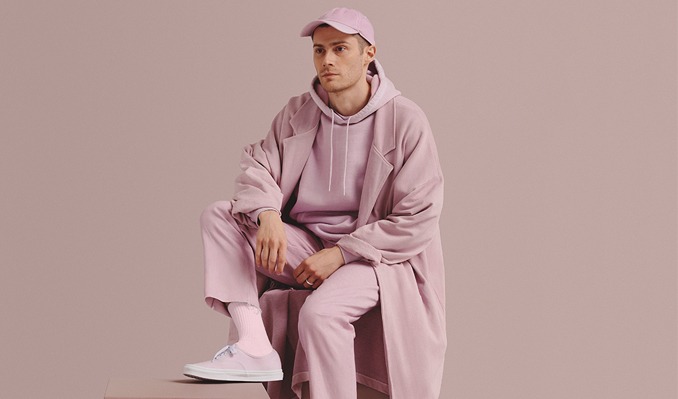 For his full-length debut Strangers, composer/remixer/producer RAC called on more than a dozen guest musicians to bring to life his lush and dreamy hybrid of indie-pop and electro. The mastermind behind much-acclaimed reimaginations of tracks by Yeah Yeah Yeahs, Lana Del Rey, and Bastille, the multi-instrumentalist born André Allen Anjos co-wrote and produced each of the album’s 16 songs without ever meeting most of his collaborators (a lineup that includes Golden Globe-winning composer Alex Ebert of Edward Sharpe and the Magnetic Zeros, Tegan & Sara, Tokyo Police Club, Katie Herzig, and Cherrytree recording artist Matthew Koma). But while its title nods to the lack of literal companionship between Anjos and his guest artists, Strangers emerges as an intensely warm and intimate album fueled by RAC’s gift for fusing breezy melody with fresh, forward-pushing sound.

A Portland, Oregon-based musician born and raised in Portugal, Anjos has created more than 200 remixes since 2007 and seen those endlessly inventive tracks reach number-one on Hype Machine 30 times. Released by Cherrytree Records in two parts—and as one complete collection on CD and vinyl—Strangers includes RAC’s first-ever solo recording: “Hollywood” (featuring Penguin Prison), which hit the top slot on all four Hype Machine charts at once upon its initial release in 2012. Also a number-one track on Hype Machine’s Artist and Popular charts, Strangers’ lead single “Let Go” (featuring Bloc Party’s Kele and rising electro-pop star MNDR) earned RAC many breathless accolades last year, with Entertainment Weekly praising the song as “a dreamy end-of-summer pop concoction that will have you grooving well into fall.”

That summery spirit infuses much of Strangers, an album powered by RAC’s pioneering use of organic instrumentation in building shimmering, dance-music-inspired soundscapes. “In some ways it’s strange for me to be considered part of the electronic world, because a lot of the time I’m working with actual, physical instruments,” notes Anjos, who plays guitar, piano, bass, and drums. One of the first remixers to draw heavily from the realm of indie rock—starting with his inaugural track, a widely adored take on “Sleeping Lessons” by The Shins—Anjos attributes his favoring of live instrumentation to a musical upbringing that included becoming obsessed with Nirvana in early adolescence and then playing in a series of metal bands throughout his teen years.

Naming the kaleidoscopic pop/rock of artists like Fleetwood Mac and Paul Simon as key influences on his songwriting, Anjos instills all of Strangers with a delicate yet deeply fun blend of sparkling melodies, super-smooth grooves, crisp beats, and often-wistful lyrics. From sweetly playful tracks like “Cheap Sunglasses” (featuring Matthew Koma) and “Ello Ello” (featuring Body Language) to more brooding and moody numbers like “Tourist” (featuring Tokyo Police Club) and the beautifully woozy “Hollywood,” Strangers continually offsets its bright and bubbly sound with a melancholic sensibility. On “Seventeen,” for instance, the chanteuse-like vocals of Pink Feathers make an unlikely lament out of the refrain “Everything I’ve wanted has been handed to me,” while “405” (featuring YACHT) laces spaced-out synth through its own starry-eyed lyrics. And with the stark but sprawling “We Belong” (featuring Katie Herzig), RAC merges quietly powerful vocals, tender strings and piano, and hypnotic beats to gorgeous effect. Woven throughout Strangers are a series of ethereal instrumental interludes, which Anjos composed as part of the yearlong process of sequencing the album’s tracks. “I wanted to create an album that takes you somewhere when you listen all the way through,” he explains. “I know it’s a bit of a dying art but it’s important to me, since it’s something I love about a lot of the records I grew up on.”

Although Anjos started playing piano when he was six, he considers learning guitar at age 12 as his first major step toward making music. Quickly graduating from playing Nirvana covers on his acoustic to forming his first metal band at age 14, Anjos began experimenting with recording after finding a promotional CD for a music production program inside a cereal box when he was 15. After high school he enrolled in the music program at Greenville College in Illinois, where he stepped up his studying of production and started devoting himself to the art of remixing. “Originally I gravitated toward remixing because I didn’t sing,” says Anjos. “Pretty soon I realized that I really enjoyed the process of taking out everything but the vocals and then recreating the track with my own music.” While at Greenville, Anjos initially launched RAC as a company that would produce remixes for hire. “That idea never came to fruition,” he says. “But the first remix I got was for The Shins, and after that it just snowballed and helped me get to where I am now.”

With remixes for artists ranging from Phoenix to U2 to Foster the People to Peter Bjorn and John to Theophilus London now under his belt, Anjos notes that he finds remixing just as creatively fulfilling as coming up with his own material. “I’ve written original songs almost my whole life, but getting into recording was what helped me really figure out how to structure a song,” he says. “I know remixing is perceived differently, but because I’m usually building an entirely new song underneath a vocal, I do feel some sense of ownership over a remix—even if it’s technically not my song,” Anjos adds.

To create Strangers, Anjos sought out each of the other artists to carefully craft the tracks which feature a guest musician. That process mainly entailed writing a demo, passing it off to his collaborator to contribute the lyrics and vocals (and, in some cases, instrumentation), then getting the track back to refine and rework until the song became fully realized. While Anjos acknowledges that the back-and-forth made for a somewhat prolonged period of writing, recording, and production on Strangers, he’s also passionate about giving his collaborators the space and freedom to push his songs into new directions. “I like it when someone can spend some time with a song, and take as long as they need to feel it out and write what they want to write,” he says. “For me, that’s the kind of approach that makes for the best and strongest kind of songwriting.”

More InfoTwitterFacebookOfficial WebsiteYouTube
*Service and handling fees are added to the price of each ticket.