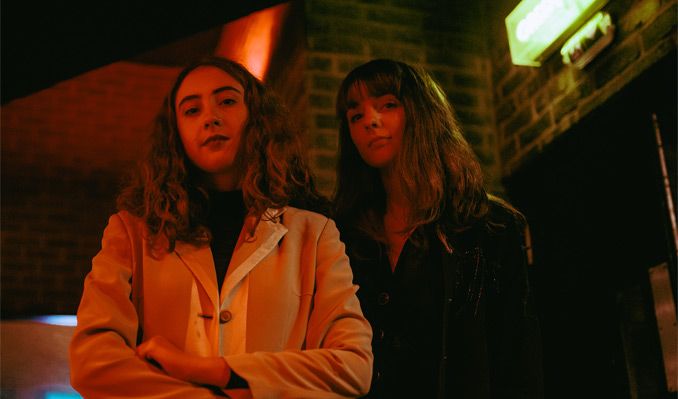 “I don’t understand how anyone other than someone our age, whose had our experiences, could write this record. I don’t think they could. Because it’s so personal. Not just in the lyrics, but in the sound of it.” - Jenny Hollingworth

Rosa Walton and Jenny Hollingworth were just 17 when Let’s Eat Grandma released their debut I, Gemini. Childhood friends who grew up writing songs that, over time, emerged into something quite magical. Call it experimental sludge pop, bubblegum-psych rock, it was a marriage of magnificence and makeshift, with synths, saxophones, clapping games, recorders, and secured them sold out shows, critical acclaim, a spellbinding turn on Jools Holland; their audience drawn to the strange beauty of their music, to something compelling and otherworldly.

Two years on, and I’m All Ears is an even greater revelation: the most startling, infectious, innovative and thrilling record you’ll hear this year — alive with furious pop, unapologetic grandeur, intimate ballads; with loops, Logic, outrageous 80s drum solos, as well as production from David Wrench (The xx/Frank Ocean/Caribou) and SOPHIE (famed for her own material, as well as work with Madonna, Charli XCX, and Vince Staples) with Faris Badwan (HMLTD, The Horrors); an album that cements Let’s Eat Grandma as one of the most creative and exciting bands in the world right now.

It is, the band say, a portrait of their lives over the past two years, as they have grown as musicians, but also as young women, finding their way through new territories, navigating friendships, romantic relationships, mental health, the ever-restless presence of technology. It draws on their love of PC Music, Frank Ocean, the record collections of their parents, ringtones, train journeys, vintage synths.

To put this record together, Jenny and Rosa really had to take themselves apart. Their debut had played on the idea of the pair’s inseparability — its title, I, Gemini, a nod to their twinlikeness, its songs revealing two strikingly similar young voices wrapped around one another, live shows and promotional photos frequently showing the pair in complementary outfits, their long hair intertwined.

This time it’s different. “We’re not twins anymore!” says Jenny. “And the thing is I don’t think we ever really were. But things have happened since the last record that have made us have our own individual lives.” For Rosa, this has included starting a relationship; for Jenny, forging her own social circle, an increased interest in electronic music and internet culture. “Before we were tied together,” says Rosa. “And I think as we’ve got older we’ve definitely become more individual as people. But we’re probably closer friends now than we were back then. So it’s not so much of a separation, we both got into different things, but we still spend all our time together.”

“It’s massively been a process of finding our own identities as people,” adds Jenny. “I don’t know if being grouped together so much affected me, but it definitely was quite a process to find confidence in myself as an individual. Now it feels like we’re not competing over the same space, because we’re both different, and I think a lot of the diversity on this record is because Rosa and I also have our own individual interests now too.”

I’m All Ears’ diversity is in fact part of what makes it such a fascinating record. “We wanted to have the full range of everything we’re interested in, that represents who we are as people, and musically, on the record,” says Rosa. “And so it feels like the record is quite broad, in both style and meaning of the tracks, because it’s supposed to represent the whole experience of what it’s like to be us over that period of time.”

Along the way they were encouraged by Wrench, SOPHIE and Badwan, though theyare keen to stress that the songs are their own — the tracks for the bulk of the album written before they entered the studio. There is no svengali. No skulking pop mastermind. “That was definitely an issue on our last record — people thinking there’s some old guy behind us,” says Rosa.  “I think people do automatically hand the credit over to whoever we work with,” Jenny agrees. “But I feel we both have a lot of references in terms of production and the sounds we like.”

Wrench, they say, was hugely important in the way I’m All Ears took shape — they speak about him with warmth and wonder, but he has no writing credit on this record — instead the band relied on his talent for “creating amazing sounds and bringing out the best in whoever he works with”.

SOPHIE and Faris Badwan, who worked with the pair on two tracks, Hot Pink and It’s Not Just Me, in London and LA, are credited with writing input. “They (did) the beats and the sound design; we wrote the chords and the lyrics and the melodies,” Rosa says, and the pair feel indebted to the way that SOPHIE’s music shaped their thinking.

But they are keen, too, to talk of their own adventures in musical technology, long before they entered the studio or encountered any producers: working on their laptops, layering and looping and making new sounds, but weighting them always with something more familiar — with their own voices, grown lower and stronger now. Or with old synths, which “have a timeless sound to them which is appealing when it comes to production,” Rosa explains. “I can imagine if you just had a whole record that just used Logic synths it could easily get dated.”

On the stupendously epic Cool & Collected — a song about “how everybody looks at other people and thinks how cool they are but doesn’t realise how cool they are themselves” Rosa also unleashes the most bombastic drum solo heard this side of Genesis. “I think that was probably down to Jenny saying ‘We need a bit of Phil Collins on this’,” she laughs. “I fucking love Phil Collins though,” Jenny says. “There aren’t that many lyrics in the song so the music expresses the feeling, and it’s a feeling that’s so hard to describe because it’s not just about insecurity, it’s about feeling hopeless and feeling in awe of someone.”

Their lyrics, too, have matured. For this record they were keen to move beyond what the band regard as the lyrical ‘crypticness’ of their debut, towards something more transparent, and at times vulnerable. “I think it’s a much more honest record. It’s very open,” says Jenny. “But as much as it is personal to us it’s also so much about youth and the impactful experiences we have during this part of our lives and so we really want other people to listen to this record and be able to relate to it. Because it’s already got so much meaning, just from our lives, but I don’t want it just to be our record, I want it to belong to everyone else.”

A case in point would be the phenomenal first single Hot Pink. “We really want Hot Pink to be a celebration of femininity,” says Rosa. “And the strength and power of it.” The song grew out of the frustration the pair felt in the way that they were treated as young women, and in the way that people regard gender. “I think it’s also important for us to realise that we are privileged and that we have a lot of things which less fortunate people don’t have and so we want the track to be empowering for those people too,” says Jenny. “It’s not a self-centred song, it’s for everyone. I think a lot of people struggle with their presentation of masculinity and femininity - not just feminine women, but also more masculine women, feminine men and non-binary people. The song’s for them and anyone else who can identify with that feeling.”

Much of the intimacy in these 11 songs comes from Jenny and Rosa’s strong bonds with each other and with their friends and cohorts. “I think this record for me feels about important people in our lives,” Jenny says. “And a lot of the songs are about our relationships with great people and self-discovery. I do feel such a massive amount of care towards the people who are close to me. And I know Rosa does too. A sense of protectiveness.” Songs such as I Will Be Waiting and Ava, for instance, address matters of mental health, struggle, moments of clarity. “The realisation as you get older that some things are more complicated, and from the outside looking at a person you can’t always see how difficult some problems are to solve.”

Other tracks adopt a broader perspective — Snakes & Ladders, for example, looks at the draw of consumerism, the pervading influence of advertising, the pull of jealousy and power. While one of the album’s catchiest lines from extraordinary album closer Donnie Darko, is about the experience of human suffering: “‘Cause the beatings just get harder and we’ll never grow them out/ ‘Cause the hand that does the dealings is the one that feeds your mouth.”

But there are moments of unfettered romance, too: Falling Into Me, for instance, which Rosa describes as being “about getting to know someone and getting over your fears and your own insecurities. It’s about telling people how you feel.” “It’s about communication,” Jenny adds. “Some of the lyrics reference being in control as a woman in a romantic relationship, and being the one to initiate. So you’re the person who tells them that you like them, you’re taking the initiative. It’s the importance of if you feel something, tell them. Because you don’t know what’s going to happen in life, you might as well just do it.”

Throughout these songs there is recurrent imagery of trains and automobiles, of movement, shifting seasons, the sense of lives expanding. After all, this is a record written by two young women whose lives have changed unimaginably in the past two years, who have come to find the world lying open before them.

“Nowhere,” says Rosa, when asked where she feel she now belongs. “I think I’m more comfortable moving every few days than staying in one place for too long… I do feel fortunate that we’ve had the opportunity to see all of these different places and cultures from touring this record. And that’s something that makes it easy for us to write together, because we’ve had the same experiences. That’s something that separates me and Jenny from everybody else.”

I’m All Ears is not only the sound of a band diverging and finding their own identities, it is also the sound of two young musicians united afresh, bringing with them their individual loves, passions, experiences. It is a record, too, that is musically exceptional, lyrically remarkable, charged with wit and and joy and tenderness. It is the kind of record after which everything changes.

Official WebsiteFacebookTwitter
*Service and handling fees are added to the price of each ticket.