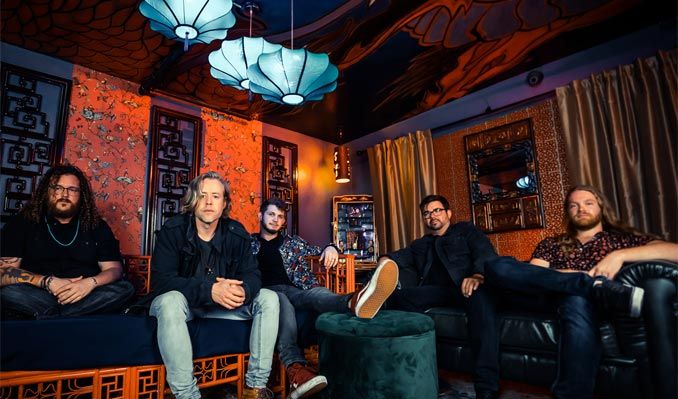 Sometimes inspiration strikes from the immersion of living in a far away place. The view of the ocean. The sound of a rainforest at sunrise. The smell of an open-air market. The embrace of the wild human experience. However,maybe the nostalgia for a certain place might be attributed instead to a feeling, or a time, or even a person. Sometimes, inspiration stems from a place that everyone can relate to, but maybe no one's actually been. This is the music of The Hip Abduction, the vibrant St. Petersburg, FL-based collective that formed over a mutual appreciation for West African and early Jamaican reggae/dub music.

The Hip Abduction began through informal jam sessions and quickly coalesced into a sound that attracted national attention. For Gold Under the Glow, the band’s third full album releasing on March 11, 2016, THA engage an indie pop acumen alongside a highly emotive and roots driven sound. Recorded in Nashville, Gold Under the Glow was produced by Dabney Morris (Wild Cub) who is credited with incorporating synth-pop teeth into the band’s global foundation and summery vibe. It’s a smart blending of world pop and club aesthetics that appeals to both audiences.

For this collection of songs, the musicians, David New (lead vocals, guitar), Pat Klemawesch (kamale ngoni,guitar, vocals), Chris Powers (bass), Dave Johnson (baritone and tenor sax), Paul Chlapowski (keyboards), and Matt Poynter (drums, vocals), found themselves drawn to a more modern synth-based sound. The track “All I Need” is a sultry romance, but the danceable rhythm and iridescent keyboards add polish. Silky vocals and building melodies are underscored by lush violin in “Awake,” a song that surges with intention and passion that is
at once personal and universal.

Songs like the bouncy “Before We Lose Our Mind,” the first official single from Gold Under the Glow, are sure to take listeners to a sun-drenched happy place. The track, with its booming percussion, handclaps and heart-lifting lyrics confirm, “As a wild child knows, there is a place where the mind becomes an island.” The percussion is both organic and synthesized while a swell of background vocals offsets New’s warm delivery. During the bridge, the musicians stretch out in cosmic refrain before catapulting back onto the dance floor.

The kamale ngoni, a 12-string lute-bridge-harp from West Africa, sets the vibe in a rhythmic cascade on “Stand Up for Love”. The track’s deep grooves and swirling electronics are at once organic and pop-savvy, while Johnson’s slow-burning sax solo adds to its propulsive energy. Mystical and pulsating, the kamale ngoni also leads off on the evocative “Ka’iwi” penned by Klemawesch. The song is built on layers of African instrumentation, sounds culled from nature, crunchy guitars, and space-age warbles.

Although Gold Under the Glow may seem a departure from THA’s 2014 sophomore release produced by Michael Goldwasser (Easy Star All-Stars, Rebelution, Corey Harris) - an album that debuted at No. 5 on the Billboard Reggae charts and No. 2 on the iTunes Reggae charts - the spirit of one-drop rhythms and skanking guitars can still be felt at the heart of some of the album’s rootsiest tracks. The distillation of island vibes translates in the dubstyled and sensual “Lifted”, which hits both the heart and the hips. Meanwhile, “Crazy”, an energetic ode to escaping the frustrations of the rat race, sparkles melodically while the rhythm hints at Calypso beats, steel drum
tones and congas.

The Hip Abduction has shared stages with the likes of Ziggy Marley, Umphrey’s McGee, Thievery Corporation, Dawes, Galactic, and .moe and has performed at Sunfest, Wanee Music Festival, Suwanee Hulaween, Orange Blossom Jamboree, Tropical Heatwave Music Festival and The BIG What?. The coming year promises national tour dates with exciting appearances at festivals including Shaky Knees, Slide Into Spring Fest and more. Fans should also be on the lookout for surf footage and travel photos from this Florida coastline collective.

Official WebsiteFacebookTwitterMore Info
*Service and handling fees are added to the price of each ticket.