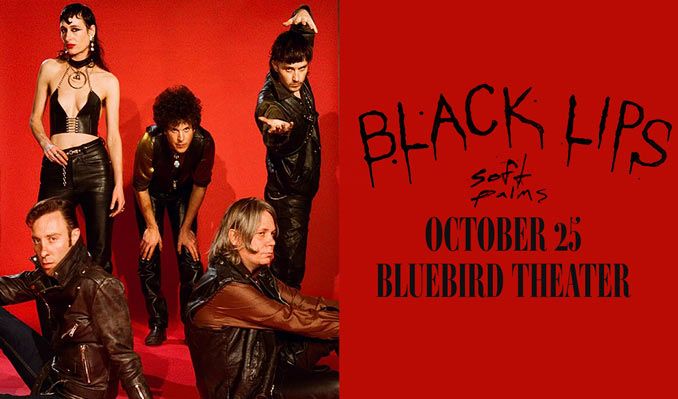 The story of the Black Lips began in Dunwoody, Georgia, a quiet, conservative suburb of Atlanta, in the year 1999. Born of a mutual love of Link Wray, The Stooges, and The Ramones, and sealed through a shared dedication to defiance, the band formed after childhood friends Jared Swilley and Cole Alexander were kicked out of Dunwoody High for separate, yet equally bad, behavior. The former classmates took their love of music and restless energy and channeled it into their newly found free time, and joined by friends Ben Eberbaugh and Joe Bradley, the Black Lips started playing shows around Atlanta, at house parties and bars. They spent this time honing their sound -- garage rock infused with blues, psychedelia, and punk, plus a healthy dose of reckless abandon -- and released their first 7-inch, "Ain't Coming Back," in 2002 on Die Slaughterhouse records (named in homage to the flophouse den they called home). Shortly before the band was set to head out on their first ever national tour, Eberbaugh was tragically killed by a drunk driver. Devastated but determined to carry on in Eberbaugh's honor, the Black Lips hit the road as a trio just a few days later.

It's been 15 years, but that passionate dedication to touring has never left the band. The Black Lips have released eight full-length albums since that first tour, and have traveled the country and the world extensively, making a name for themselves as an electrifying, must-see live act. It helps that the same mischievous spirit that helped speed up their exit from the educational system is still very much alive, thriving in its new environment on stage, resplendent with punk rock theatrics and miscellaneous bodily fluids, amongst other things. The band's energy and unique "flower punk" sound helped them build a rabid fan base, and after releasing their first two albums through Bomp!, they put out the critically celebrated Let It Bloom on In The Red records. This record garnered the Black Lips features in Spin and Rolling Stone, and they were soon signed to Vice Records, subsequently releasing Los Valientos Del Mundo Nuevo, an ambitious album recorded live at a bar in Tijuana, Mexico, in February of 2007.

In their decade-long tenure with Vice, the Black Lips have evolved from wildly crooning over fuzzy, raucous music at house shows full of kids to wildly crooning over fuzzy, raucous music at international festivals in front of thousands of fans. They have toured consistently, with their zeal for travel taking them all over the world, and not without some international adventure: In 2009 the Black Lips went on their first (and last) tour of India, playing shows in Bangalore and Mumbai before chaos struck in Chennai after the band ditched their toned-down presence in favor of classic Black Lips capers, including some not so well received Lips-locking. After the same sex smooching and also Alexander baring his butt to the rowdy crowd, the tour's sponsors pulled out and the band was nearly jailed, their passports confiscated by the disgruntled promoters. According to Swilley: "The first few shows, we were being really reserved because we didn't want to offend anyone, but they kept telling us to do what we wanted...I guess "do whatever you want" didn't include kissing each other, and I think Cole mooned the crowd, which is a huge no-no. We had to physically wrestle our passports back from the promoters. It was the scariest 15 hours of my life, but we got out of there." The band ended up taking a 200 mile cab ride to the next province and hopped a flight to Berlin, narrowly escaping Indian prison.

Undeterred, the band jumped at the chance to become the first Western punk band to tour another notoriously conservative continent, the Middle East, just a few years later. Why? "It was important for a number of reasons," Swilley says of the tour. "We've always wanted to push boundaries of where we go. Plus, a lot of people told us we couldn't do it, and anytime someone tells us we can't do something, then we kind of have to. We have O.D.D, oppositional defiance disorder." This time, their shows went off without a hitch, and Black Lips played shows for crowds in Jordan, Cyprus, Egypt, Lebanon, Iraqi Kurdistan, and the United Arab Emirates in 2011 in support of that year's release of their record Arabia Mountain, produced by Mark Ronson. The title was actually a reference to a mountain in Georgia, but that didn't stop the Lips from playing the record all over the Middle East, to enthused fans and without causing any further international incidents. "Everyone was really nervous about us going there, but it really went off without a hitch," adds Swilley. The band also hasn't abandoned plans to become the first rock band to play on all seven continents, hoping to hit their last remaining one, Antarctica in the near future, and disregarding Metallica's claim of this achievement: "Just when we were securing the funding, Metallica sniped us. They took a boat, probably a gold plated Versace boat, down there. But they actually didn't play on land, and they didn't play with amps, so technically they haven't played Antarctica. Metallica hasn't beat us yet."

For their ninth studio album, the Black Lips have teamed up with Sean Lennon, who got on board to produce Satan's graffiti or god's art? in 2016. The Black Lips had formerly worked with Lennon on Arabia Mountain, where Lennon played theramin on several tracks. The band moved up to Lennon's studio compound on a remote farm in upstate New York, and spent several months living and breathing the new record. This removal from the outside world, plus the return of beloved early guitarist Jack Hines and the exciting addition of new members Oakley Munson on drums and Zumi Rosow (the first female Black Lip) on saxophone, infused the project with a focused, intoxicating liveliness, similar to the spirit that had brought the Black Lips to life in the first place, way back in 1999. Only this time, the band is drawing from nearly two decades of experience and musicianship, and the newness is tethered by familiarity: Munson is a longtime friend of the band, and Rosow has been playing live with the Black Lips for several years now. There's even a dash of kismet: unbeknownst to the band, after being off the grid for some time, Munson had just recently moved to a cabin a short distance away from Lennon's compound, and the first time his phone ever rang after he plugged into the wall, Alexander was on the other end, asking him to play.

All of this excitement and immersion created the perfect storm for the Black Lips' most musically evolved album to date. "It was a really beautiful experience. We were very far from civilization, and we were all living at the studio. We weren't going home to our own beds every night; that was our whole world, 100% of the time," says Swilley of the experience. "Making this record was the most wonderful few months of my life. It was by far my favorite time recording an album so far...It was just magic." The Black Lips were joined by Saul Adamczewski of Fat White Family, who helped co-produce the record with Lennon, plus another rather magical guest: Yoko Ono. "She's very cosmic," Swilley says of the celebrated artist and musician, who makes an appearance on a few of the tracks. The final product is urgent and thoughtful, reflecting the growth the Black Lips have experienced since bursting onto the scene (once or twice quite literally on fire), but it's also true to their original blistering, careening take on rock n' roll: fuzzy, dirty, and rife with three and four part harmonies. Satan's graffiti or god's art? proves that while they may have grown up a bit and changed a few things around, the Black Lips are still as creatively unhinged and exhilarating as ever.

FacebookTwitterOfficial Website
*Service and handling fees are added to the price of each ticket.