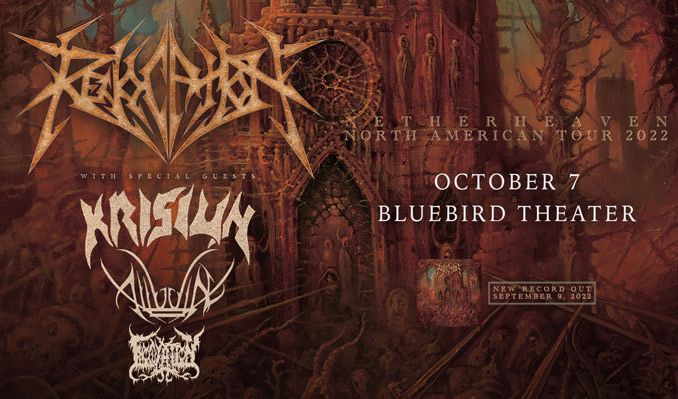 Having delivered five killer albums boasting some of the most potent, technical and abrasive metal unleashed over the last decade, it would be easy for Revocation to sit back and rest upon their laurels. However, with their constant drive to push their sound ever forward and refusal to compromise their integrity, this could never be the case – and Great Is Our Sin is their most dynamic, boundary-pushing and weighty release to date.

Front-man Dave Davidson commented about the first track: “‘Communion’ is the fastest song we’ve recorded to date, and while it’s blistering in terms of speed, there are also some proggy elements present to add contrast to the aggression.”

When it came time for the follow-up to 2014′s Deathless, the quartet had their work cut out for them, and their response to the challenge is a record that grabs you by the throat and refuses to let go. Never forcing anything, the songs that would comprise Great Is Our Sin came together organically, and while the members being spread all around North America would have been an impediment to some,Revocation drew strength from it.

Reuniting with producer Zeuss (Hatebreed, Bleeding Through), who also helmed Deathless and 2012′s Teratogenesis EP, the record packs the requisite punch, yet retains the organic feel with which it was conceived. Known for their technical prowess, the band remained dedicated to upping the ante without ever losing sight of the importance of good songwriting.

While the songs come together to make for a cohesive record that is engaging from front to back, they are further united by the lyrical concept penned by Davidson. The title itself appropriated from Charles Darwin’s quote: “If the misery of the poor be caused not by the laws of nature, but by our institutions, great is our sin”, Davidson went about building a theme that was not only fittingly expansive, but also had real resonance with regard to contemporary society. “The concept revolves around the folly of man throughout the ages. Some themes come from historical references that are hundreds of years old, yet sadly these themes are still very relevant today due to mankind’s refusal to learn from the lessons history has taught us, time and time again.”

Regardless of the state of the world, nothing is going to slow Revocation down any time soon. Whilst the lineup has changed over the ten years the band has been in existence, Davidson’s passion has never waned, and they are arguably sounding better than ever as they look toward the future. “We can’t wait to bring these songs out on the road and perform them for different audiences all over the world. ‘Great Is Our Sin‘ is a new chapter for the band, and collectively we feel that it is our defining record to date.”

Revocation history:
In 2006, lifelong friends Dave Davidson, Anthony Buda, and Phil Dubois-Coyne formed the core of what would become Revocation. The trio gigged throughout New England, and recorded a three song demo, "Summon the Spawn." The guys would spend the next few years writing and performing new songs as often as possible, before finally tracking their debut album in 2008.

"Empire of the Obscene" was recorded with Pete Rutcho at Damage Studios in 2008, and made a huge splash upon release. Their brand of technically-minded thrash offered a new take on thrash, and a much more energetic and vital approach to the technical death metal. The debut lead to the band signing with Relapse Records. By early 2009, the band had already re-entered Damage Studios to record "Existence is Futile."

The release of their label debut was met with critical acclaim and truly began to spread their name throughout metal on a global scale. Magazines including SPIN and Decibel heaped praise on the band, and Dave Davidson became an official Jackson Guitars endorser. In 2010, guitarist Dan Gargiuolo joined the ranks as a touring second guitarist, just in time for the band to perform in Europe, Japan, the US and Canada. In total they would play in 13 countries and over 150 shows.

During the fall and winter of 2010, the band recorded "Chaos of Forms" with Rutcho at Damage Studios. The album vaulted the band to new heights, and afforded them even greater touring opportunities. Revocation also appeared on the Relapse Records label showcase, presented by Scion A/V in February 2012. The year also saw the addition of bassist Brett Bamberger, along with the recording of the "Teratogenesis" EP for Scion A/V.

In February of 2013, Revocation recorded their fourth album with producer Pete Rutcho. Their self-titled album was released in August 2013, and was followed by a slot on the Summer Slaughter Tour 2013.

More InfoOfficial WebsiteTwitterFacebookYouTube
*Service and handling fees are added to the price of each ticket.